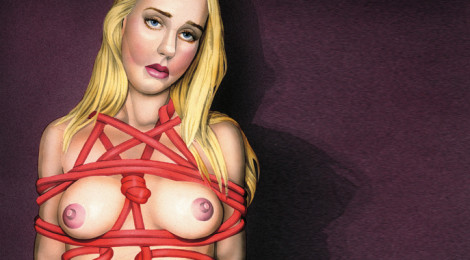 Dear Forced Womanhood,
Being a dominant, beautiful woman who believes in the superiority of women, I was drawn to Len because of his slim, girlish looks and meek manner. I took charge on our first date and have maintained control ever since.
We went to my isolated house where I said I liked to be naked at home but I wanted to tie him up, also naked, so he would not become too aroused—after all, this was our first date. He agreed and I was pleased to see he had hardly any hair on his almost feminine looking body. He even praised my rope work when I finished tying him stringently, from shoulders to feet, with a clothesline. I paraded about naked, lewdly fondling myself  while he watched helplessly with an oozing erection. I sat next to him on the couch and played with both of us while we watched a television show, squeezing his balls whenever he came near to orgasm. Then I put on one of your CD videos, with a really gorgeous “victim”, and studied his interested reaction, especially when I said I would love to act out the bondage and feminization with him. Len;was so horny by then he would have agreed to anything. I kept him in that state until he was dressed in lingerie, heels, wig and make-up, and had eaten my pussy repeatedly, then I gave him a partial blow-job and finished by tying a rope around the sensitive spot on his cock and jiggling it until he came.
In no time I had Len trained. He would strip on entering my house, go to the bedroom where his feminine things were already laid out and dress himself. Often I would start him out with a dress or skirt and blouse then undress him a bit at a time over the evening to bra, panties, nylons and 5” stilettos. I would tie him up hand and foot while applying his makeup, taking at least thirty minutes to get it right. I would photograph him and we would make our own videos of his “forced” crossdressing, with me throwing his partly tied, lingerie clad body across my lap and spanking him with my palm and hairbrush. I tied him all over the house and out in the private back yard in intricate and quite strenuous positions, never loosening his tight knots until he promised to love my pussy for a long time. 1 got him used to a partial blow-job or hand-job, then he would finish himself off by having one end of a rope tied around his cock’s sensitive area and the other end about his wrists (cock bent back between his thighs) or his gagged mouth, so he could bob his head and shoot off into his face.

Finally Len gave up his job and male life and moved in as my “female” slave. I bought him a complete wardrobe from your Transformation and Transvestite catalogs, along with various leather bondage gear and your creams and tablets. I took feminized Len with me to the many lectures I give to women’s groups and he served as my bondage demonstration model; I even let the women practice their own ropes and knots on him and supervised their lashing him with velvet-covered whips. Len grew to 1ove it all!
But Len didn’t love his cock and sex drive dwindling while his breasts grew and his body became soft and feminine, helped also by the constant wearing of corsets and 5” to 6” heels. I quickly and mercilessly quashed his spirit. I knocked him out with my fists, stripped him to garter belt, nylons and 4” mules, then strung him up in a hogtie from a cellar beam and swung him by his cock and balls while lashing him with a rubber hose and a thin, limber whip that got into hard to reach places. I kept him down there three weeks, dildoing, walking on him, lashing him, particularly his balls and ass-crack, and tying him in very punishing positions. Len surrendered and was locked in your Phallic Fidelity Enforcer, then later in a FL4A Frenum chastity.
Before the “incident” I’d been giving Len female lessons, and he’d been a good pupil. I stepped them up, along with his usage of the creams and pills. Within a year his cock could only take a FL2 Frenum chastity, and I broke off its screws, denying him sex forever. I’d never used his cock, anyway. Soon his breasts were ready for large implants, then his transformation into a beautiful, sissy, she-male bondage slave was complete.

Appropriately named Liane (meaning “binding” in French-Latin), she is my model on all of my lectures. The women are intrigued by her tiny, metal-encased cock and how well she eats pussy. In public and private sessions I urge them to bind their husbands and have sex so Liane can see what she’s missing—then she gives the bound man or men blow-jobs and (all still tied) is fucked in her ass and tit-tunnel. It’s fun watching her and the bound men! 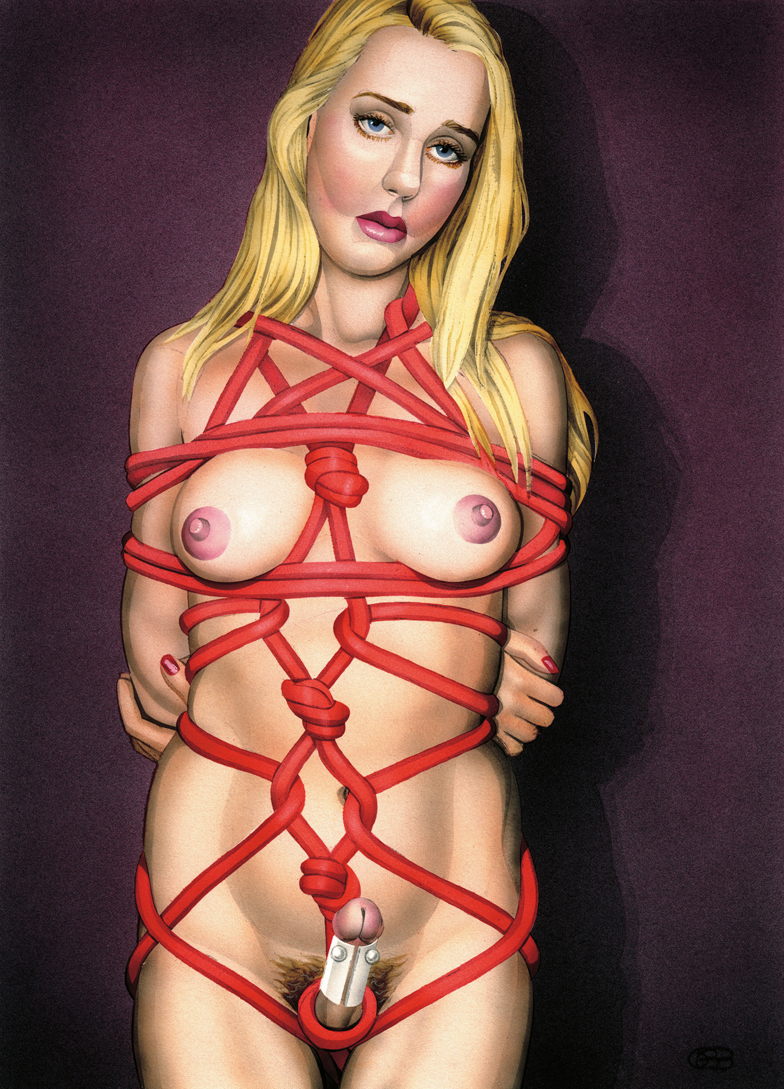 ← Women Take Their Disobedient Husbands To Mistress Veronica To Turn Into She-male Slaves
What are the main things you need to know to really turn a man into your she-male? →