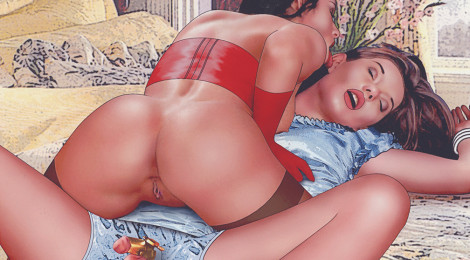 The following is a brief excerpt…to continue reading this story and others like it pick up your copy of the magazine here.

What a mistake I made coming onto my secretary Anna! Slender, blonde, almost fragile, in her mid-twenties, she always appeared so gentle and innocent, and I couldn’t resist. I even had the idea that maybe she was a virgin! The thought of being the first man to put his cock in her small mouth or her tight pussy made my middle-aged cheater’s mind crazy.

I was always playing around behind my wife’s back, and I had the idea that Anna was waiting for a strong male like myself to show her the ways of sex, and I was sure she wouldn’t resist. But that night when we worked late turned into a nightmare for me when she suddenly transformed into a vengeful spitfire, 180 degrees different than she usually was, and red-in-the-face enraged that I thought she would be an easy lay! In fact she got so worked up I became frightened. She said she would file a complaint against me and she wouldn’t stop until every detail of my seduction became public and ruined my career at the company—including the fact that I took my penis out before she even had a chance to say no! When I begged her not to do this, that I would do anything to make up for my error, she smiled with such triumph that I began to doubt this was the same Anna who had been working alongside me. Maybe she had an evil twin and was substituting in Anna’s place for the day? But no, it was the same Anna, and I had to do as she said or face the consequences.

It turned out that she was no virgin, but a female of infinite kinkiness—she’d just kept it hidden in the office. She demanded I come over to her apartment that very night where she was going to “mold me to her specifications.” When I protested that I had to get home to my wife, she said, “Screw the bitch, you’ll have to make up an excuse, Mr. Dapweather, because I’m in charge tonight. Don’t tell me you’ve never lied to her before!”

When we got to Anna’s apartment she made me strip naked. I was deluded enough to think it might be a prelude to some kind of sex, just on her own terms and turf. How wrong can a man be! No sooner was I bare than she gave me a pair of panties to put on. I looked at them like Superman looks at kryptonite, and that’s when she revealed her ace in the hole: she’d turned on her phone’s camera when I was trying to seduce her in the office, and she had everything recorded! Come to think of it, it did seem a little weird the way she’d positioned the phone on her desk when I was trying to get her to put my dick in her hand.

“Into the panties, slut!” she said, and I pulled them up. They felt ridiculous on me, not to mention so tight, but I fit my cock into the snug lacy nylon while Anna looked at me with more of that evil smile. “Now your bra and pantyhose!” she snapped, and I obeyed even as she looked at the video playing on her phone. I could hear my voice on the recording as I said, “Come on, Anna, you know you want to touch my dick!” Oh fuck how could I have acted like such a fool!

I tugged the pantyhose on as best I could and Anna straightened them for me, and then gave me the sluttiest red dress that only a ten dollar hooker would wear. “I’ve had my eye on you for a long time, Mr. Dapweather. I’ve had fantasies of dressing you ever since my initial job interview at the company six months ago. You just made it easier for me to carry out my goal!”

“You mean, you bought all these things for me…?”

“Yes, don’t you remember? You gave me your sizes in case you needed to send me out to get you a new shirt for a special meeting or something, ha-ha!”

I stood in my pantyhose feet in the trashy dress, and then she put a wig cap and full blonde wig on my head. I felt so ridiculous but she seemed to love it. She didn’t bother with full makeup but took out a lipstick and gave me what she called a real “cocksucker mouth.” I stood there helplessly, knowing that she had the goods on me and I could only comply while hoping I could figure a way to outwit her.

My mind was whirling in anxiety. What kind of young woman had I hired as my secretary? True, I was sleazy in coming onto her, but she was bat-shit crazy! Wasn’t she? Or was this merely the revenge and rage I deserved? Suddenly she noticed a glaring omission in my outfit. “You need some high heels already, girl!” she cried, and hurried to her bedroom and came back with brand new backless fuck-me slides. She made me put them on and, even though I was no fashion expert, I could see how cheesy they looked with the pantyhose on my feet.

Grabbing me by the wrist, Anna led me to the mirror in her bedroom and I saw how completely trashy I looked. From my blonde wig to my slash of a red-lipsticked mouth to my hairy forearms to my knobby knees in the pantyhose just under the short hem of the whorish scarlet frock, not to mention those pantyhosed size ten male feet in backless slides—I looked like a nightmare tranny!

And Anna looked so excited and happy to see me this way.

Pulling me over to the bed, she put me across her lap and began to spank me. First through the dress, and then on my panties, and then on my bare cheeks! I didn’t get hard at all, this was nothing but humiliation, but I didn’t know what else to do but take it. Everything was stacked against me in these days of sexual harassment complaints. I’d asked for it by being a macho asshole, and now I had to take my punishment or risk total exposure!

I didn’t think a small girl like Anna could spank so hard, but her clear-polished fingers had surprising force as they smacked my bottom into what felt like a terrific redness. Then she grabbed a hairbrush and worked me over with that.

“How can I ever go home to my wife!” I cried, afraid of what she was doing to my behind. “What can I say when she sees my ass? You’re making it feel like hamburger!”

“Won’t that be a challenge, hmm?” she said. “Just pretend you have a cold and tell her you’ll sleep on the couch for a few days while your tushy heals up!”

“Oh Anna do I really deserve all this??” I cried.