Browse: Home   /   Transvestite at Fetish Bar meets Master Who Turns Him into A Gorgeous She-male Slave 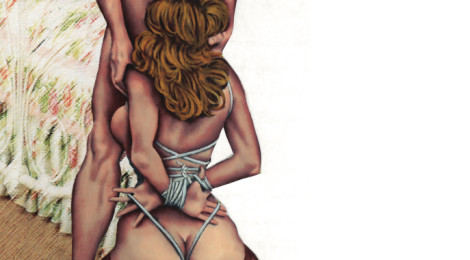 I used to think I was a heterosexual male. But now I know I am really a heterosexual woman. When I look down at my body, with its swelling D-cup breasts, curvaceous hips, and slit pussy, I can’t help wiggling in happiness. And I owe it all to my master, Gunther.
Like a lot of men, I have crossdressed in secret all my life, dreaming about finding some dominant, understanding woman who would encourage or even force me into feminine clothes and a feminine role. I have been married twice. But, of course, when I would meet a woman I would present myself as a normal, manly man to win her. (I would have been too ashamed of my crossdressing then to make my innermost self vulnerable by telling anyone else about it.) SO, when, each of my wives discovered after several years of marriage that I liked to wear panties, she was surprised, horrified, felt betrayed-and filed for divorce.
Then I’d go right out and start dating some other woman, presenting myself to her as a man, while secretly hoping she’d somehow sense my secret self (without me telling her) and make me crossdress. Why was I so stuck on it being women who feminized me? I guess I was afraid that wearing dresses and panties meant that I was some kind of homo-and we all know that’s bad, right? So I went twice as hard the other way-toward women-when I wasn’t crossdressing. If you’d suggested I let a man feminize and enslave me, I’d have said you were crazy.
Then one night I was out dressed with some members of a Boston area CD club. When everything else closed up, they wanted to go to a fetish bar across the river. The people there were clad in all kinds of B&D garb-leather, chains, whips, collars, leashes, piercing, etc. I saw one woman in black latex who led a male slave around on a chain. He wasn’t feminized, but I envied him anyway.
Then this big, hairy guy in a leather vest and chaps dropped into a vacant chair at the table I was sharing with a few other transgender ladies, and announced his name was Gunther. He must have read my mind or something. Maybe masters like Gunther have radar that helps them zero in on likely slaves. All I know is he read me completely, and started right in telling me what a hot little she-male slave I would make and all the dirty, humiliating things he’d make me do.
I tried to get Gunther to go away, at first. I told him I was a heterosexual man and just because I crossdressed didn’t mean I liked other men-I didn’t, in fact the whole idea turned me off and nauseated me! But Gunther didn’t blink an eye. He just said that was good, because if I was his slave he would always make me wear the highest heels, the flimsiest panties, the frilliest garter-belts and the sheerest nylons, plus three-inch crimson nails, slut makeup from morning to night. I’d spend all day with my penis locked up tight in a chastity device so I couldn’t cum, he would only take it out to punish it. Moreover, he would make me learn to take it up the ass like a woman and like it.
I continued to tell Gunther I wasn’t interested, I was straight. But, to be honest, what he described turned me on. And that made me uncomfortable. The next thing I knew, Gunther had grabbed me and bent me over his knee, pulled up my skirt and was spanking me hard on the bottom right there in front of my friends and everyone. And I felt so much like a haughty high school girl being chastised by her boyfriend, and he felt so much like a strong, dominant man, that I couldn’t help what happened next. I was too hot and steamed up. It was my every fantasy come true, even if it was coming from a man putting me in my place as a woman. I found myself in Gunther’s lap kissing him madly and swearing to be his she-male slave forever. Gunther took me home and before the night was out I was tied up my knees up by my head, my butt high in the air, being fucked like a piece of meat. My anus’ response proved conclusively to me that I was a heterosexual all right. Not a heterosexual male-but a completely normal, submissive heterosexual woman.
The next day “Master Gunther” had my nipples pierced, his name tattooed on my ass, and my penis helplessly encased in steel. Then he began training me to be his personal urinal. He told me what an important honor this was for a worthless she-male slave like me. How important it was I prove my gratitude for being his slave by doing a perfect job. He punished me every time I choked or spilled a drop, and eventually I learned to swallow all his pee without spilling any, no matter how much beer he’d had to drink.
Since then, he has used hormone pills and patches to grow my breasts, and after I had proved my devotion by serving him faithfully for several years, sent me overseas to have my body completely transformed into that of a woman. Then Master Gunther took my virginity all over again. Today I am a happy female slave, completely and contentedly feminized, thanks to my beloved master, Gunther.