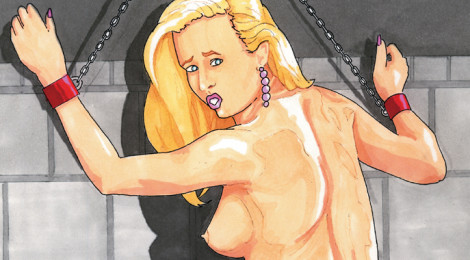 Two Friend’s Bondage Contests Are Hard On Their She-males

Honore / May 30, 2013 / Comments Off on Two Friend’s Bondage Contests Are Hard On Their She-males / Stories and Letters

My best friend, Kim, and I have darling little she-males that we love to put in bondage. Actually, they, being submissives, enjoyed it too, until we started to make a game, or contest, out of it. Whenever we decide to go out for the night we make a contest to see which of us can truss up our she-males the most. The loser has to buy drinks.
Well, a couple nights ago, when we decided to go out hunting for a couple of young studs we tied for the first time. Not even the two friends going with us could decide a winner.
Kim had started her she-male squatting in the cellar against a brick wall. It didn’t appear too difficult, at first, to me. Although Kim did have her ankles in a spreader bar. “Ah, but look what’s attached to it,” she proclaimed. When I looked closer I thought she was a genius. She’d chained his chastised dick tautly to the spreader bar. She didn’t dare move her feet, nor even raise up an inch. The only way she could avoid a painful tug on her tiny dick was not to move a muscle. Then we journeyed to my place. As usual when I go out the favorite place for my sissy is in the closet. All the girls clapped when they saw my she-male lying there on her back. Wrists and ankles stretched to their fullest and locked to a spreader bar. In her mouth a huge penis gag. A strap, cinched tight with an equally huge plug stuck up her ass was what made it a tie for that night. So Kim bought first the round of drinks, and I bought the second, both of us wondering how we could top each other.