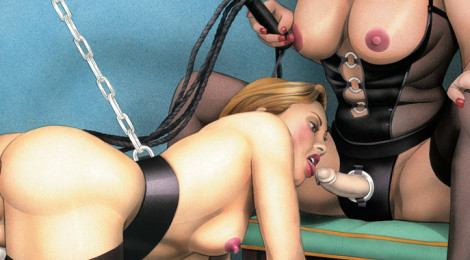 Dear Forced Womanhood,
For years my wife and I have enjoyed imaginative role-play. Usually I was her Master, ‘forcing’ her to submissively please me in many ways. I guess I went a bit too far when I suggested another woman, our neighbor Karen, join us. Oh, not for real. We just pretended she was there and my wife had to play the passive role, describing how good her tits felt, and begging to eat her pussy. It was pretty hot for me to listen to my normally shy, demure wife get into the lesbian thing, and I thought she kind of enjoyed it. Later though, she said she felt degraded. Occasionally I’d encourage her to be in control, and she would half-heartedly spank me or put me in lingerie, but with little enthusiasm. Until last week. It seems she found the F/W site on my computer and that got her thinking. That night she made me wear a short, pink nightgown, low heels, and even made my face up a little. I was thrilled! She showed me a new toy she’d bought, a strap-on dildo of all things. She blindfolded me and demanded I suck it. Blushing happily, I obeyed while she called me names, laughing at my erection. All the while the VCR camera she’d secretly set up recorded everything, even my falsetto voice begging her to fuck me. She put me on the bed, butt lifted high, totally exposed. Still blindfolded, I could hear her behind me, moving around, but I was too excited to twitch. She’d NEVER been this adventurous before! I trembled with anticipation.
Well, sometimes we should be careful about what we ask for. I wanted to be feminized, forced to be used like a woman. And, that’s what happened. The cold lube was applied to my anus, and her soft hand massaged my engorged cock. Then the pressure began against my little hole, and she whispered that I should press back, push it into my pussy. I did, controlling the painful process until it popped past a point. Suddenly it felt only full and pleasant, and.feminine.
“Move your ass, sissy!” Ordered my wife. “Tell me you want to be fucked by a man!” I moaned as her ‘cock’ slid in and out. “Yes, yes I want to be a girl for you. I’ll be your whore, do anything you tell me!” I was so excited anything seemed possible. She wasn’t through teasing me, though. “Tell me you’ll suck a real cock. Beg to have a real cock up your little pussy!” The thought was so foreign, especially when suggested by my passive wife. “Yes!” I moaned.”Yes I will let you watch me suck cock, and I DO want to be used by a man!”
At that point, my identity was erotically blurred, and I DID feel like a woman. She laughed evilly upon hearing my testimony.
I bucked like a bronco, wiggling my hips and shaking my butt. All the while my wife somehow managed to reach around and stroke my shaft. For a moment the thrusts stopped, and her dildo seemed to throb, but then she was stroking me again, harder, and I came hard, moaning like a true bitch in heat. I collapsed onto the sheets I’d soaked and fell asleep immediately. An hour later I awoke. She had cleaned the room up, put away ‘my’ clothes and toys, and suggested I shower. After dinner she asked if I remembered embarrassing her with Karen during one of our games?
I did, and even though it was only as a fantasy, I felt bad, and told her so. “That’s alright sweetheart.” She said. ‘’I can now understand how exciting it was for you to hear me talking about being with another woman. And I want to make you happy. Besides, I have to admit it was erotic listening to you play the part of a woman, begging to be fucked. Did you enjoy it?” What a woman! I felt so close to her right then. She really understood me, and my sometimes strange little desires. “Yes dear, it was one of the best times of my life.” I replied honestly. Her smile was ear to ear now as she turned on the TV remote. “I’m glad honey.” She purred.” There isn’t anything we need to be embarrassed about with each other, is there?”’ I agreed, and looked at the screen. “This,” She announced,”is a copy. I thought you might find it interesting and somewhat revealing.” There we were as I remembered, kneeling on our bed. From the shadows a male figure, naked, is standing there too! My blindfold keeps him hidden, but my wife is stroking his cock, making it swell. She slips a condom on him, and presses it to my ass. While her hand jacks me off, I am shown pressing back onto him, then humping him with pleasure. Even my voice can be heard begging to be fucked deeper, asking to be turned into a woman. My shy, delicate wife is fondling his balls even as she strokes my dick. Soon the man arches his back and apparently cums. When he withdraws his withering penis from my now gaping ass hole, the condom is squishy with sperm. I’m too busy to notice however, as my wife makes me cum. Just before he leaves the room the camera catches his face. It is Steve, Karen’s husband, from next door! I’m standing over my wife now, fists balled, ready to smack her around. There was a new look in her eyes that I’d never seen before. “Sit down, sissy. Unless your poor little pussy is too sore.” I did. She’s been in charge ever since, which is all right, I guess. Steve and Karen are coming over for dinner tonight. Then we’ll watch a movie. Should I be worried? 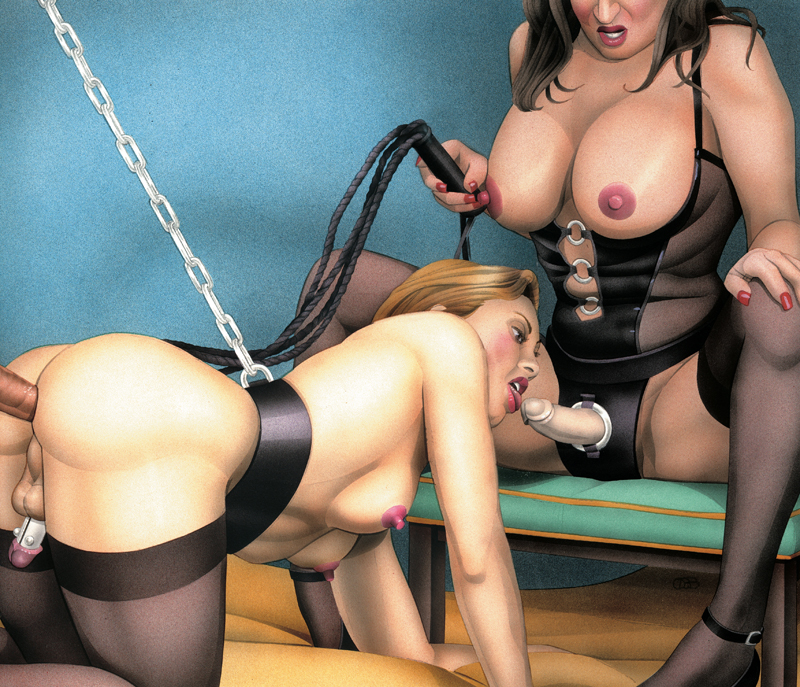