Ever since high school I used to make-up my date’s face if he fell asleep. Most boys took it as a joke, a few got mad, and not one was interested in being feminized. Then in my senior year of college I met Brian, who was slight, with a rather girlish figure and longish blond hair. He not only let me make up his face but dress him in sexy lingerie. He made a very beautiful girl.
We began dating, but soon he felt self-conscious about being constantly feminized, though he did love it. I solved that by being dominant. I slapped his face, commanded him to strip, then bound him before starting his feminization. I found I loved dominating a feminized male, and Brian was the perfect subject.
We took an apartment off campus and lived together for the last semester. Except for the days he had sports, Brian wore a waist-cinch, panties and pantyhose to his classes. When he came home he changed into sexy female clothes (from your TRANSFORMATION and TRANSVESTITE catalogs) put on a wig and make-up, then studied, relaxed, or did the cooking and housework in leather wrist and ankle hobbles, until I arrived to bind him more restrictively with ropes or leather gear.
We married after graduation, and I wore a black leather tuxedo and 6” stiletto pumps while Brian dressed as the bride. He was stunning. He wore 4” stilettos and ankle hobbles under his long gown, and his red-nailed hands were fastened together by the rings on his wrist cuffs, with a big bridal bouquet hiding his bondage. I slipped the wedding ring on his finger, just like a groom. As we got into the car, I took the bouquet and tossed it for my girlfriends; Brian hadn’t invited anyone.
On our honeymoon we traveled by train, and I kept Brian in bondage and sexy things the whole time, taking our meals in our large compartment. At the hotel we posed as sisters, and rarely left the room. By the time we returned to a new, isolated house Brian was comfortable posing as a woman, and I then began giving him your pills and creams and having him constantly wear a corset and 4” to 6” stiletto heels. He didn’t mind growing breasts but was soon distressed as his small penis began to shrink.
The attic, with all of its beams, made a good discipline room, and I strung Brian up by his wrists, ankles, and even by his long blond hair and lashed him soundly with a variety of whips. I kept him up there, tied in intricate, strenuous ways, for a month, eating and drinking from dog bowls, until he surrendered to my will.
My aunt retired and gave me her house cleaning business, which I ran while Brian stayed home and did-the accounting.
One day my friend Connie came by and Brian, in French maid’s uniform, wrist and ankle hobbles, penis gag and FL4A Frenum Chastity, with barbells and a leash ring, waited on us, then resumed his housework. Connie was so taken, not only by his feminization but thorough job of cleaning, that she suggested I rent Brian out to selected friends. I liked the idea and stepped up Brian’s feminization.
Soon Brian had breast implants, his figure was as sexy as any woman’s, and his little cock was permanently put in a FL2 Frenum, with the screw heads broken off so he couldn’t have sex. It took another trip up to the attic for a few    weeks of heavy discipline; spankings, whippings, dildoings, and crawling in bondage to love my cunt and shoes and their high heels with his mouth and tongue, before he was a proper meek and obedient, sexy she-male maid slave.
“Bridget” was so popular that I also rented her for cleaning and other “services” out to rich women. Now I am looking for more sexy she-male maid slaves for my business. Perhaps some of your readers would like to apply for training and transformation.
Meanwhile, I get sex from various men—all of whom are better lays than Bridget was when she was Brian. I often take her along to watch, tied hand and foot and gagged, her tiny Frenum imprisoned cock hidden by a G-string. Then she is spanked, whipped, tied all sorts of ways, and fucked in the mouth and ass. I also join in with my big dildo! 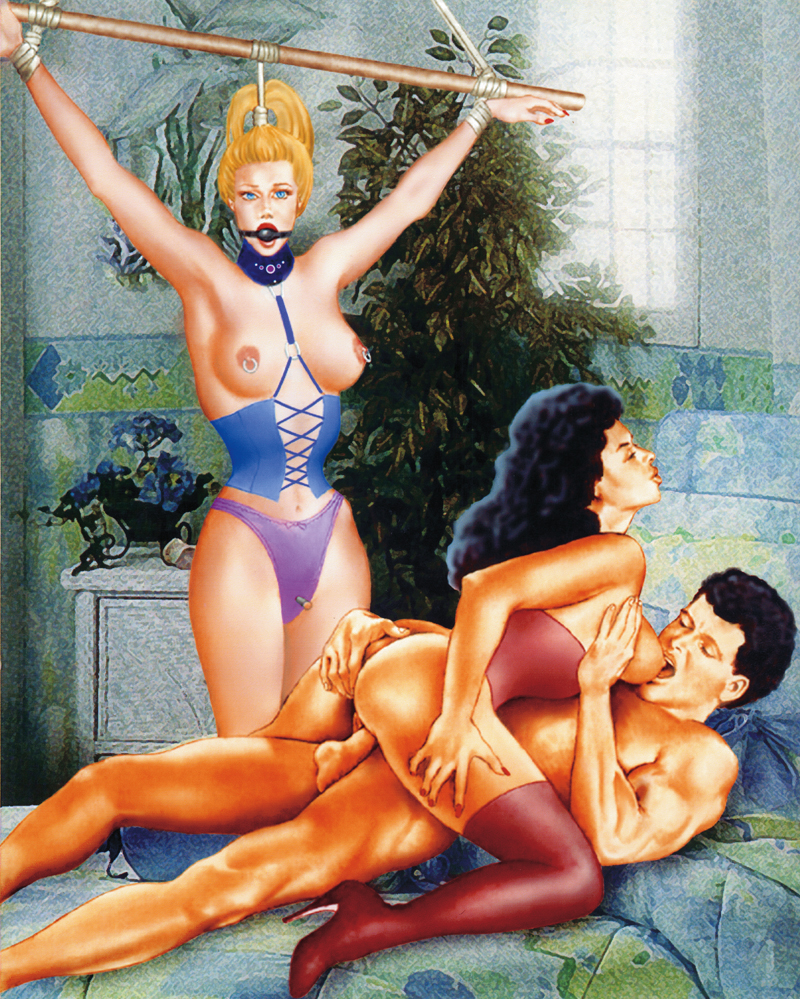